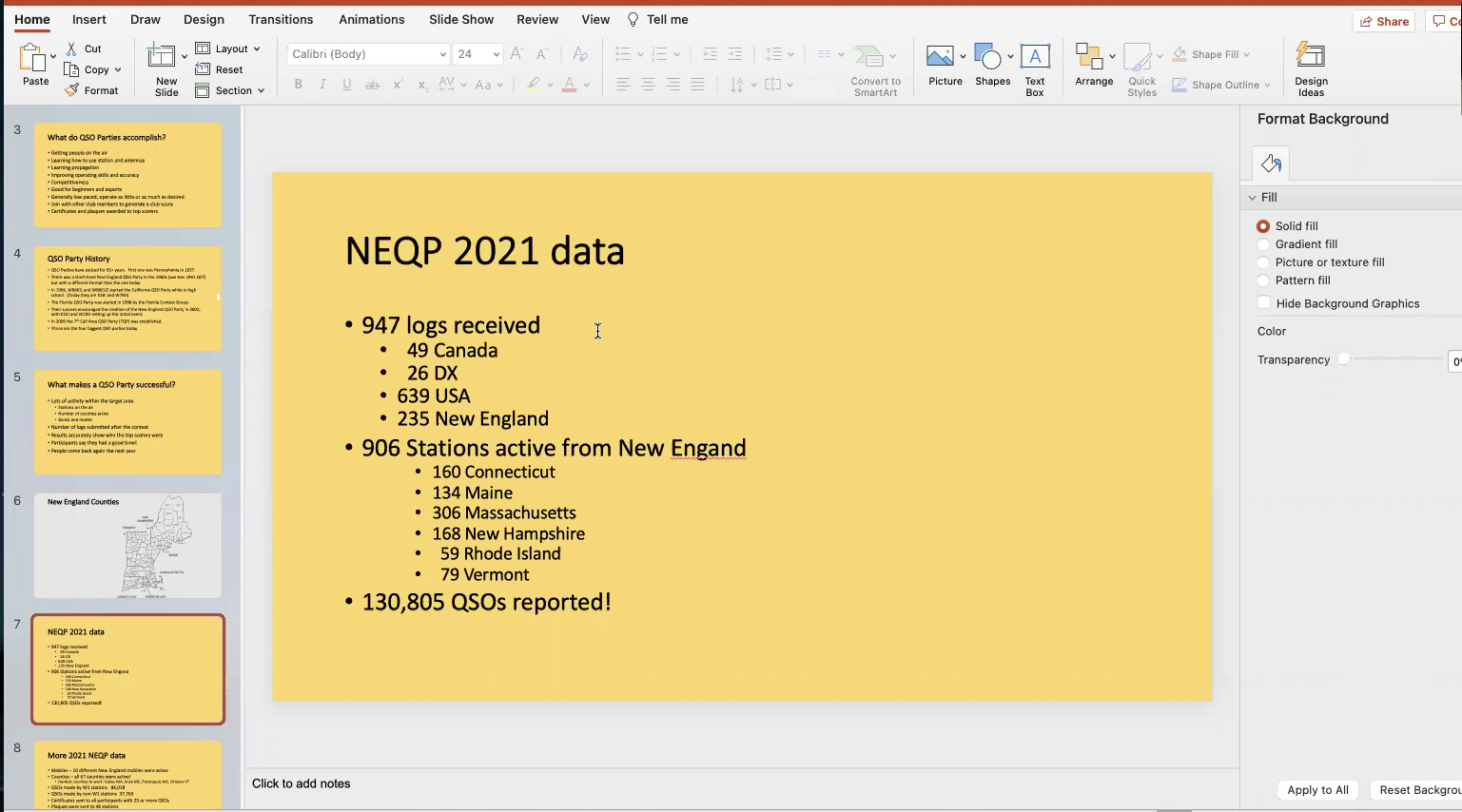 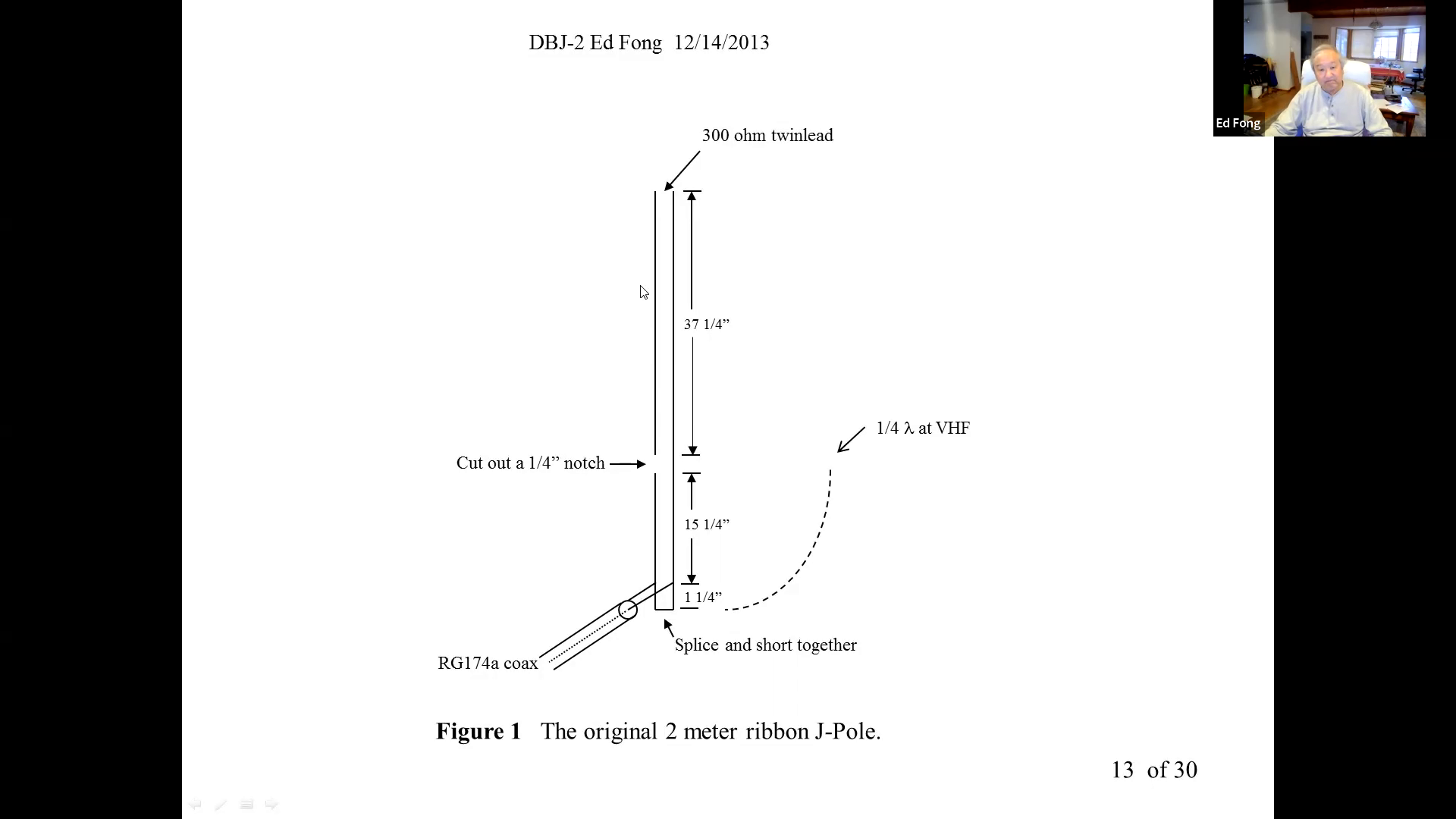 The first was “The Storied History of the Ham Radio Callsign” by Mike Ritz W7VO. The second was “Learn and Have Fun with Morse Code” from the Long Island CW Club.

SSTV demo was presented by Sumner W1VIV and Steve N1MH.

His slides are available here and the video is below. 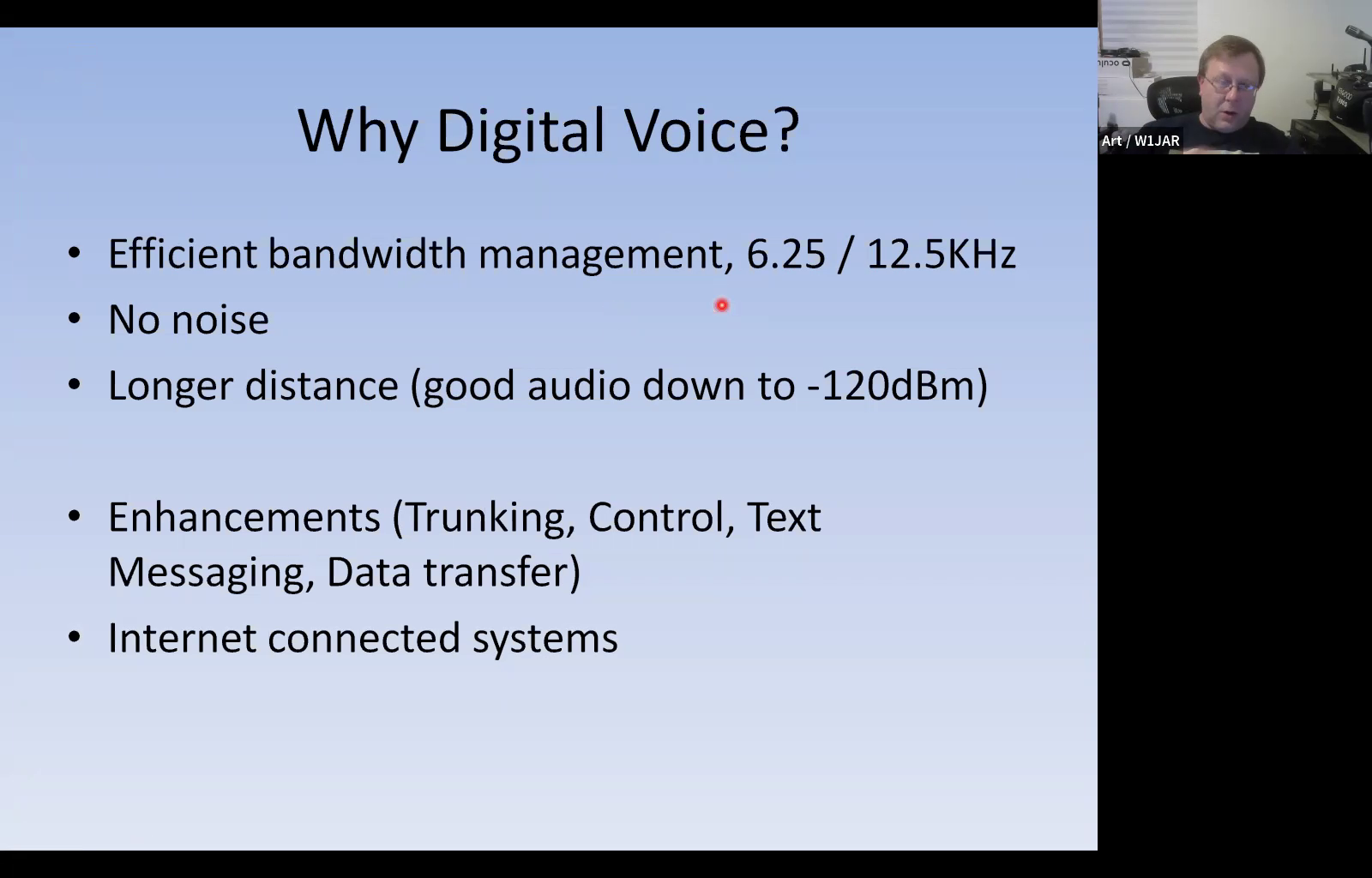 She spoke about operating and successfully contesting VHF and HF as a mobile. She included some of her Parks on the Air experiences. 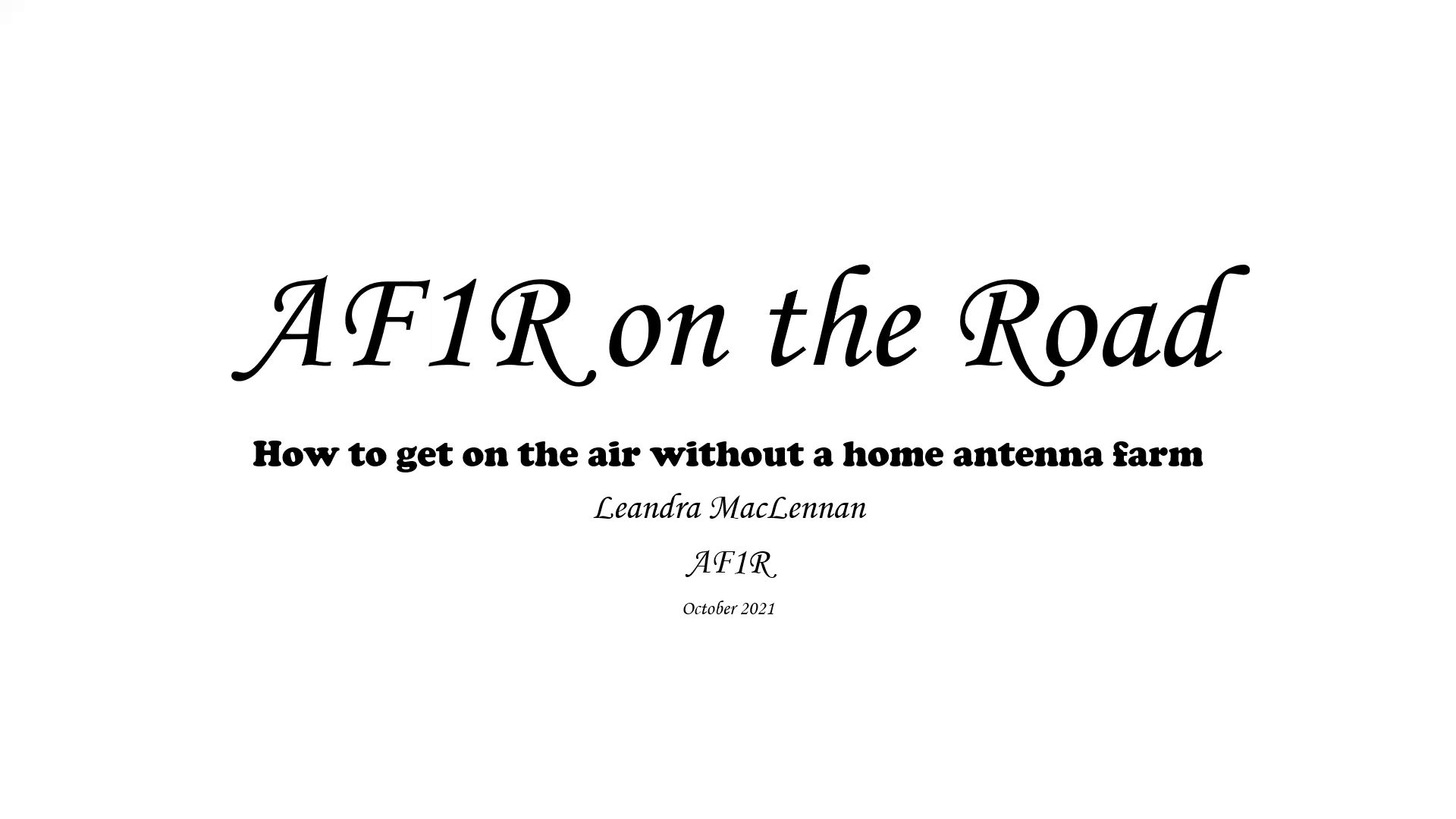 He also talked briefly about his candidacy for ARRL New England Director. The video of the presentation is below. Meeting was on zoom. 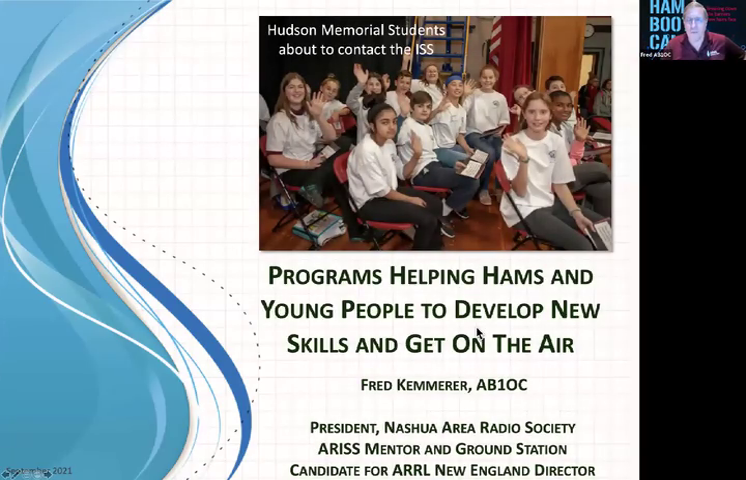 The video of the presentation is below. Meeting was on zoom. 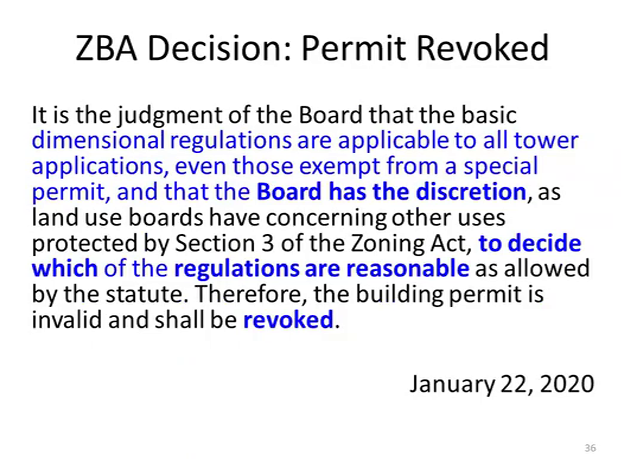 This is a partnership between Hams and non-Hams using Ham, GMRS and FRS radios to help keep our communities safer in the event of an emergency or disaster. The NRW Program had it origin in the ashes of the Camp Fire, and has been a tremendous boost for the El Dorado County Amateur Radio Club.  The video of the presentation is below. Meeting was on zoom. 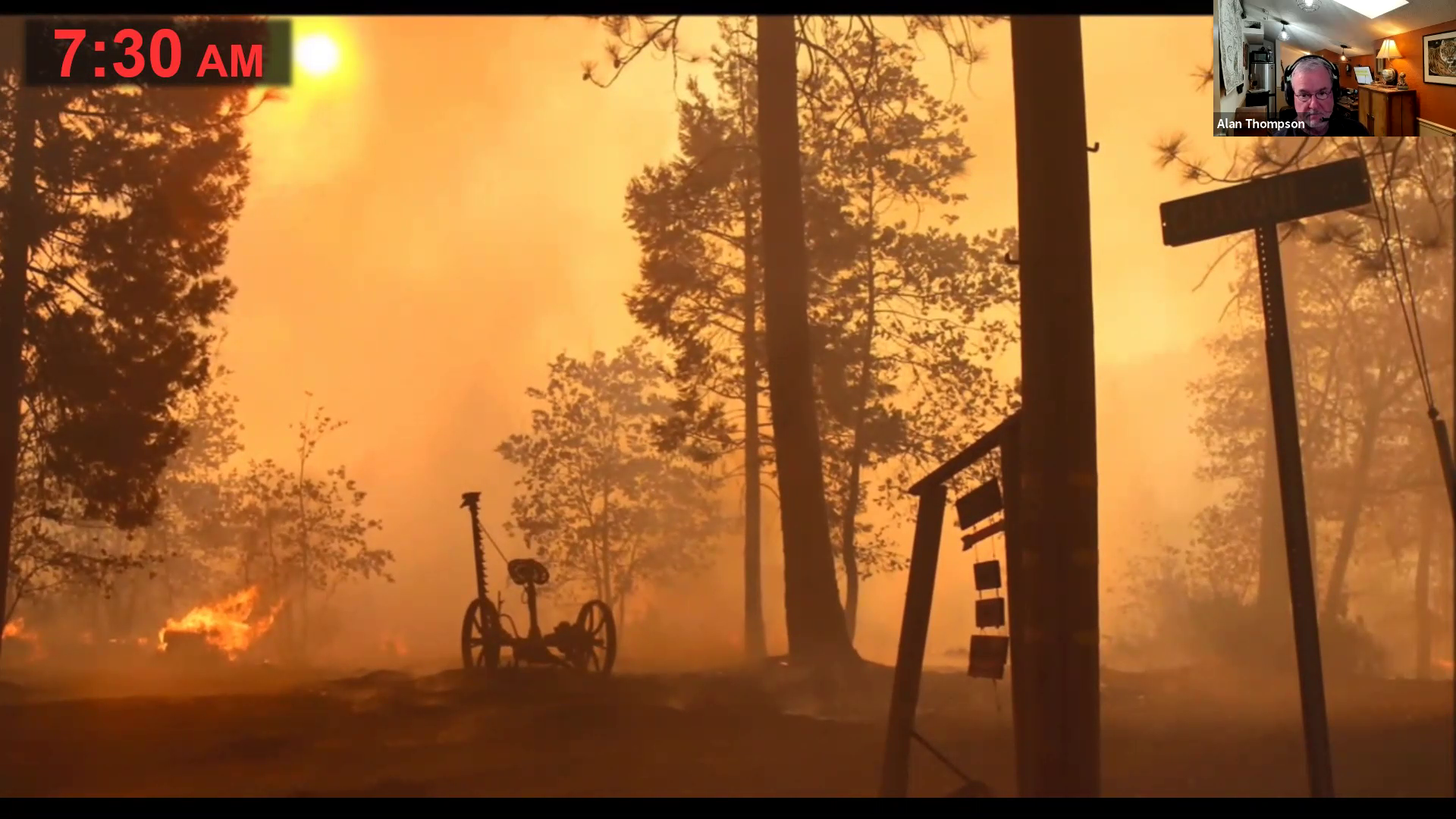 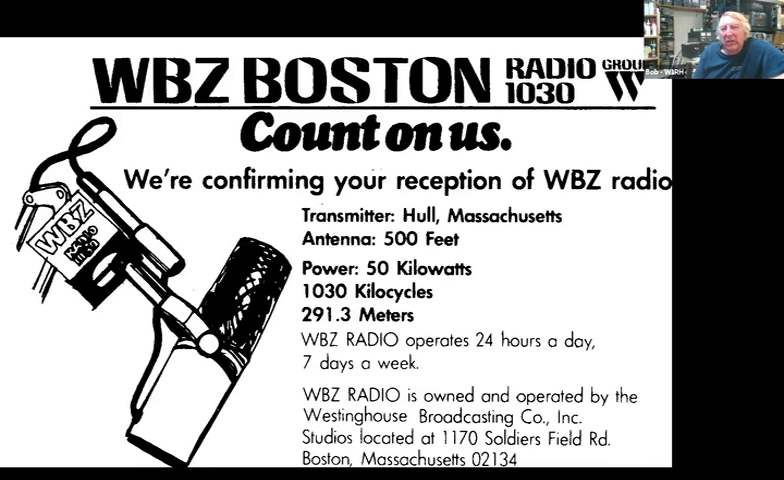 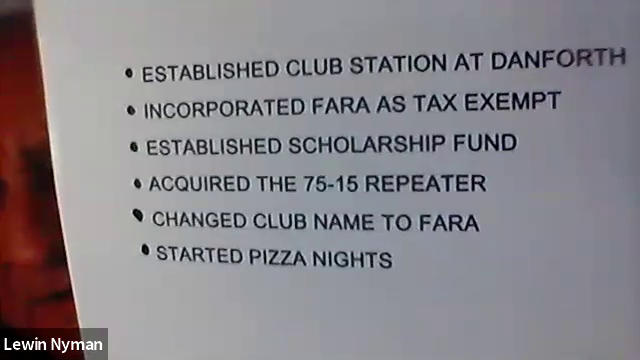 Discussed Proposed By-Laws Changes. Interested members who want to work on the bylaw subcommittee can email John at president@w1fy.org

We were shown some Dxpedition videos presented  by Dave Coaglin K1HT . The information & hyperlinks are: 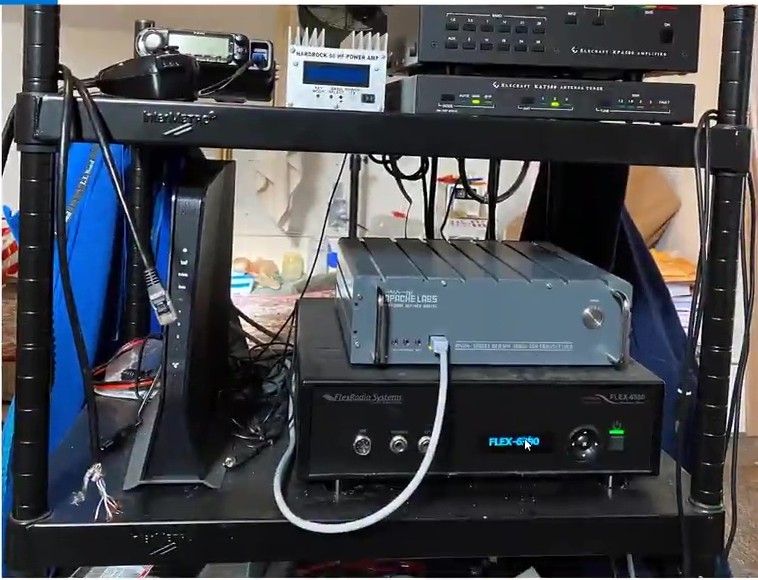 December 3, 2020: Brian Loverro, K1BML, spoke about some of his favorite HTs.

Brian is a collector of handheld radios with over 200 of them in his shack in Oxford, MA that he uses out in the field for various purposes. With these transceivers are the accessories like extra extended life batteries, antennas et al. His favorite is the Yaesu FT60, though he has HTs from just about every manufacturer. Our interest was very solid based on the questions and discussion after Brian’s formal presentation. 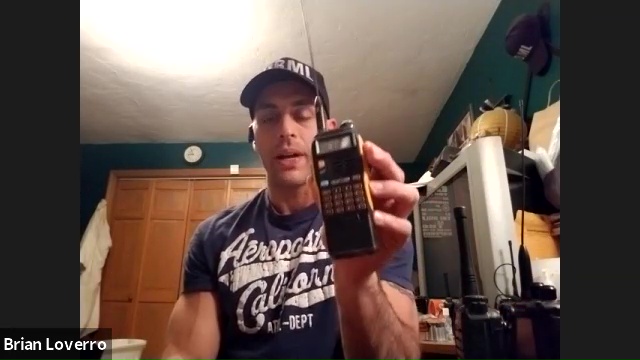 Like almost everything else, computers have touched many aspects of ham radio. From station logging, to the modes we operate-many things have changed. This presentation went through a brief timeline of the merging of technologies, and discuss how computers are used in ham radio today. 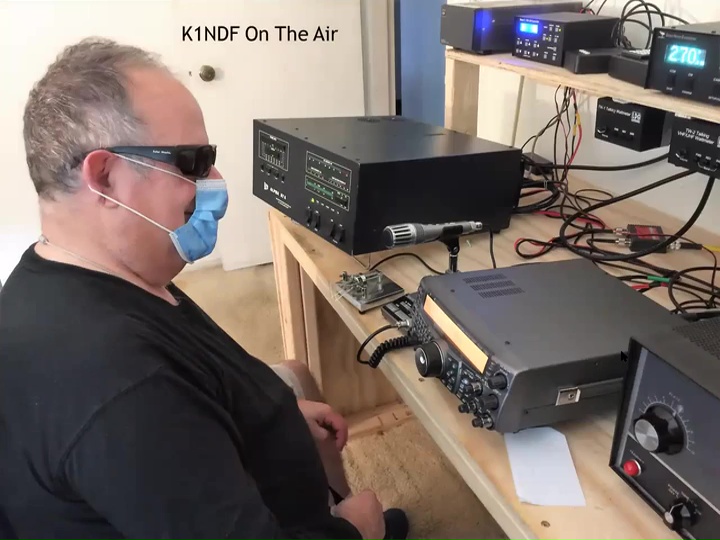 He discussed some of the lesser known ARRL services. Meeting was on Zoom.

On June 4, 2020: Sumner Weisman W1VIV spoke about Navy Ham Radio in the Korean War Era. Meeting was on Zoom. 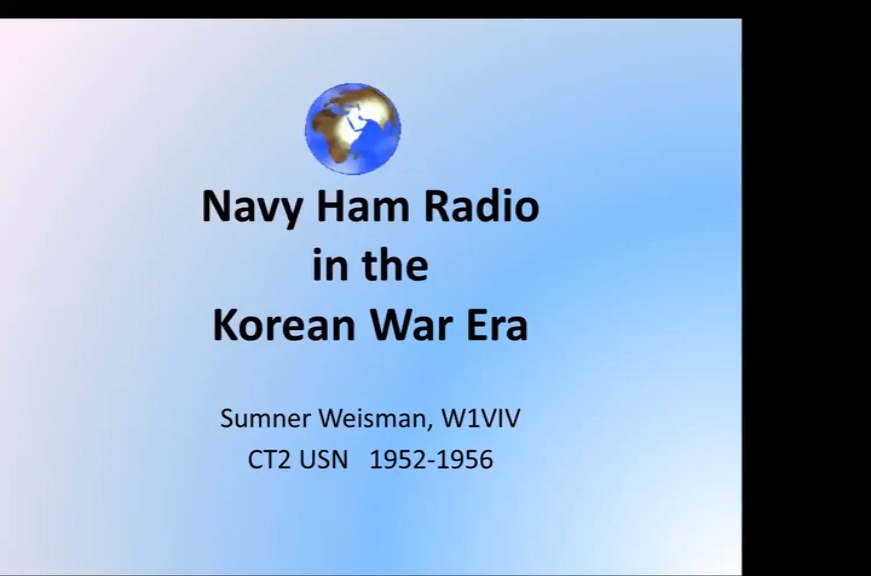 Brian is a repeater operator, self employed technology specialist, and an avid fan of the digital radio modes.  In his business, “The Shameless Wolf”, he spends time helping people with their computers, Network, Home Theater, and anything else Technology.  He operates three repeaters in Stoneham, MA, one Fusion, one D-Star, and one Analog and also operates the hub of an Internet linked repeater system called “The Wolf Pack Network”.  This has repeaters starting in Northeastern Massachusetts and going as far north as Ossipee New Hampshire.

This meeting to discussed what sparks kids’ interests in wireless technology these days and how we might apply that knowledge to get more youth and families into amateur radio and hopefully interested in joining FARA. The presentation was followed by a discussion where group participation is expected.

Quick Bio:  Bob Phinney K5TEC got his amateur radio license from FARA by taking the “License in a weekend” course in 2004 in the basement of the Danforth Library. But he was involved in public service CB communications since the early 1970’s, and was president of a REACT team working with Brookline Police during the Blizzard of ’78.  As a science teacher in Brookline for 38 years and mentoring the youth-run Clay Center Amateur Radio Club for 14 years, Bob has helped nearly two hundred youth achieve ham radio licenses over the years. He now runs a non-profit STEM education center in Natick which has two radio rooms and offers regular license classes in Tech, General, AE, VE, and Morse Code, as well as workshops in a wide variety of STEM and maker-space ​_topics.

October 3, 2019: Dave Miscia KB1YXL.  “Fun Things To Do With The International Space Station”.

Dave Miscia, KB1YXL, has over 25 years of experience working with satellites.  From his first job in broadcast television receiving news feeds, to running mobile uplink vehicles, to designing those same vehicles, he’s worked with everything from Ku Band high-power transmitters to portable Inmarsat terminals.  Since leaving the broadcast business in 2018, he has continued following the things in the sky, especially the International Space Station.

****What happens when a family member contacts your Club saying, “W1XYSK has passed away, and we don’t know what to do with 3 rooms full of radio and electronics equipment”****

He gave a talk on mag loop antennas. He demonstrated one at the Marlboro Flea.

He is the Eastern Massachusetts ARES Section Emergency Coordinator and ARES SKYWARN Coordinator for NWS Boston/Norton. See https://ema.arrl.org/ares/ for more information on ARES.

MARS or Military Auxiliary Radio System has changed dramatically from it’s creation in 1925. ARMY and AIR FORCE MARS members support a very different mission than you may have heard of before 2010. Every day, MARS members are operating mixed mode voice/data nets using encrypted communications in support of a DoD Mission to provide situational awareness to DoD planners, in the event of a “Very Bad Day” scenario.  Learn about MARS, and how all Amateurs can support this mission, without joining MARS, and learn how to join MARS, if you have the capability and interest.

Bio:  Tom Kinahan N1CPE has been a ham for 38 years, with experience participating in Boston Marathon communications for over 30 of those years, Past experience volunteering with the Red Cross as a Disaster Action Team member and leader, and former Massachusetts State RACES officer, currently US ARMY MARS Member/Leader since 2010.

Promoting Awards as a Catalyst

January 3, 2019:  Video “Nine DXpeditions to DXCC Ten Most Wanted” from the collection of David Hoaglin K1HT. We also had our “Show and Tell”.

His source for the DVD that we viewed (Nine DXpeditions to DXCC “Ten Most Wanted”) was k4uee.com/dvd .  Bob lists several videos besides that one.

Andy Stewart spoke about the BITX40 and uBITX QRP kit radios from India.  These very popular transceivers are openly specified for both hardware and software, and have thus encouraged a lot of tinkering.  Andy discussed many of the common modifications, as well as his extensive modifications to the Arduino software.  Andy has also modified the kit to make it accessible to visually impaired hams.  There was a demonstration of Andy’s version of both of these transceivers.

Joe’s presentation will use Amateur Radio to explore possible correlations between weather systems and sporadic E clouds to see if they are collocated.

There are major changes occurring in the hobby.  How should the section and clubs like FARA stay on top of all of this?  First off, let’s understand exactly what a section manager does and why clubs like FARA are important to the section.

Then driven by FARA’s interests, Tom will discuss some of many new initiatives in the Eastern Massachusetts section.  Here are some possible topics, time permitting.

Tom will wrap up the  with the donation of an ARRL book.

Larry Banks, W1DYJ  “One Ham’s Journey with Antennas” (It’s sort of a historical survey of the antennas I’ve built/used/etc., ending with a quick look at FT8 and 160. )